Don LaFontaine was proclaimed the King of Voiceovers, having voiced more than 5,000 movie trailers and an estimated 750,000 television and radio spots spanning his 40 year career. Screen Actors Guild named him the most working actor in their history because he signed more contracts than any other actor in SAG history. Reading was a fundamental foundation of his legacy and work.

Don LaFontaine is a native of Duluth, Minnesota. After graduating from High School in he joined the army and eventually was stationed at Fort Meyer, Virginia, outside of Washington, D.C. He was assigned to the United States Army Band and Chorus as a recording engineer.

After his discharge from the service, he moved to New York City where he found work at National Recording Studios as a sound engineer/editor. Late in 1962, he was assigned to a young radio producer named Floyd L. Peterson, who was creating radio commercials for “Dr. Strangelove.” They worked so well together that in January of 1963, LaFontaine joined Floyd Peterson, making it a two man operation, working out of Floyd’s apartment.

Over the next couple of years, the company rapidly grew to employ thirty people and expanded into its own building – a carriage house on West 57th Street. Floyd L. Peterson, Inc. was one of the first companies to work exclusively in motion picture advertising. Prior to that time, most film promotion was done in-house by the studios. It was during this period that the format for the modern trailer (previews of coming attractions) was developed, and LaFontaine and Peterson were among the first to create the catch phrases that still dominate trailers – “In a world,” “A one-man army,” “No where to run, nowhere to hide and no way out,” etc.

In 1965, a mix-up in scheduling prevented an announcer from making a session, and LaFontaine was forced to create a “Scratch” narration for radio spots for the film “Gunfighters of Casa Grande,” in order to present something to the client, Columbia Pictures. To his surprise, they bought his performance, and over the next 16 years, he voiced thousands of spots and hundreds of trailers.

He spent a number of years as a head of production for Kaleidoscope Films, Ltd. – one of the premiere trailer production houses. In 1976, he started his own production company, Don LaFontaine Associates. His first assignment as an independent was “The Godfather, Part II.”

In 1978, he was asked to join Paramount Pictures, heading up the trailer department. Over the next three years, he literally became the “Voice” of Paramount. In 1980, he was named Vice President, but he missed being involved in active production.

He left Paramount in 1981 and moved from New York to Los Angeles, again as an independent producer. One of his first phone calls was from a young agent named Steve Tisherman, who urged LaFontaine to pursue voice-overs more aggressively. He signed with Steve Tisherman and never looked back. Over the past 25 years, LaFontaine cemented his position as the “King of Voice-overs.”

Aside from his continuing work in the trailer industry, he has also been the voice of NBC, CBS, ABC, Fox and UPN, in addition to TNT, TBS and the Cartoon Network. By conservative estimates, he has voiced hundreds of thousands of television and radio spots, including commercials for Chevrolet, Pontiac, Ford, Budweiser, McDonalds, Coke, and many other corporate sponsors. At last count, he has worked on nearly 5000 films, including appearances as the in-show announcer for the SAG and Academy Awards. Based on contracts signed, he has the distinction of being perhaps the single busiest actor in the history of the Screen Actors Guild.

LaFontaine was married to singer and actress Nita Whitaker and is the father of three beautiful daughters. 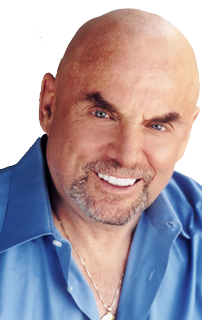